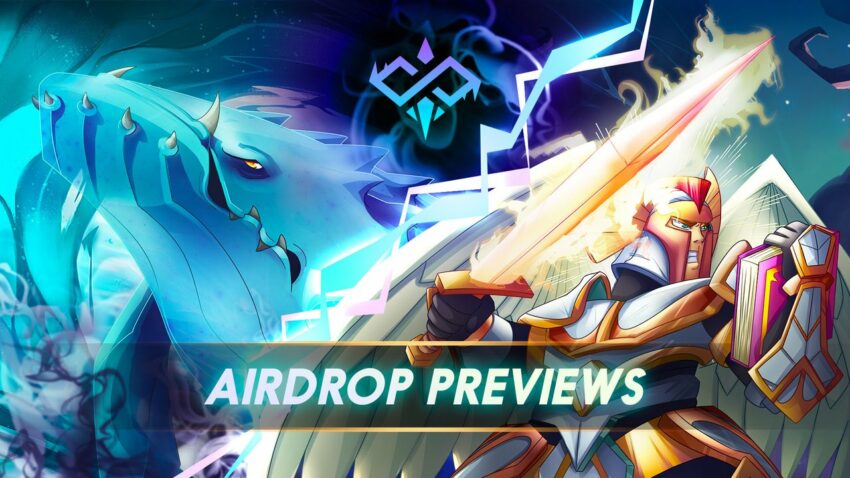 With nearly 1.5 million packs sold already, Chaos Legion is proving to be an immensely popular expansion for Splinterlands. And after already revealing and releasing the first airdrop card, Dr. Blight, the Splinterlands team now shows us the next two cards that will be dropped once the public sale goes live in January.

Splinterlands continues their tradition of rewarding expansion pack purchases by airdropping special cards to those who buy Chaos Legion packs. In order to qualify for these airdrops, you need to purchase Chaos Legion packs before the general sale opens. (Note: the general sale opens once 3 million packs are sold). Each pack offers a 0.33% chance of receiving an airdropped card. Additionally, anyone who buys a lot of packs is guaranteed to receive one of EACH card for every 300 packs purchased. Unlike previous pack sale airdrops, this one does not include any guaranteed gold foils. However, the chance of receiving a gold foil version is increased to 4% for this drop.

The pack purchase counter is cumulative. You can purchase 1 pack or 1000 packs at a time, and they will count towards ALL future airdrops for Chaos Legion. There are 14 airdrops in all, each coming after an additional million packs are sold. So even if this airdrop leaves you high and dry, you’ll still have chances in future airdrops based on total pack purchases.

The two cards for this upcoming airdrop are both Legendaries. One for the Water Splinter, named Baakjira. Starting with 11 Health and the Void and Slow abilities, Baakjira functions as a tank for nearly any occasion! At level 3 it can even self-heal!

The second card, is for Light. Uriel the Purifier also functions as a tank, but one that packs a serious punch! With 4 base attack and the new Recharge ability, Uriel only attacks every other turn but has the potential to dish out 12 damage in one hit! Ouch!

Where do I buy?

You can buy Chaos Legions packs on the official Splinterlands store. They cost $4 USD each, payable only with in-game Credits. You can purchase Credits with Paypal or any of more than a dozen cryptocurrencies. There is one little catch. In order to purchase Chaos Legion packs right now, you also need VOUCHERS. One per pack.

Airdropped daily to anyone staking SPS, the Splinterlands governance token, VOUCHERS are a new rewards system, implemented in the month leading up to the Chaos Legion launch. If you wait until the public sale opens, which should be in a month or so, you wont need any VOUCHERS. But, you will miss out on the chance to receive this particular airdrop.

If you have no Vouchers and no way to earn them, they are for sale on the Hive-engine market. Current prices run at about $3.30 USD each. Though not long ago, VOUCHERS were selling for well over $20! You’ll definitely want to factor in that extra cost when deciding whether to purchase packs now.

Splinterlands is a play-to-earn trading card game that started on the Steem blockchain as Steemmonsters. However, over time the project changed names. Now gamers can play the game on desktop and mobile devices using the Hive blockchain. Thanks to cross-chain functionality, cards and tokens can also be traded on the Ethereum blockchain and on Wax. Splinterlands now also has a governance token, called SPS.

Splinterlands allows anybody to play and earn cards and other resources. Players need to create a set of cards to defeat their opponent. Cards come in different rarities with seven different stats. In addition these cards have abilities and come from seven factions. The way cards work together is dependent on all these different attributes.

Players earn cards by winning matches. They can combine cards to gain levels. After that you can sell cards on the open marketplace for cryptocurrencies, or lease them to other players. Splinterlands features a very active buying and leasing market!

Phil Hall
Phil Hall has been a gaming enthusiast since birth and a crypto enthusiast since 2017. He enjoys new discoveries and sharing those with others via blogging and photography. You can follow him on Twitter or read his other articles on Medium.
Share this article with your friends

What is the Play-to-Earn Business Model?