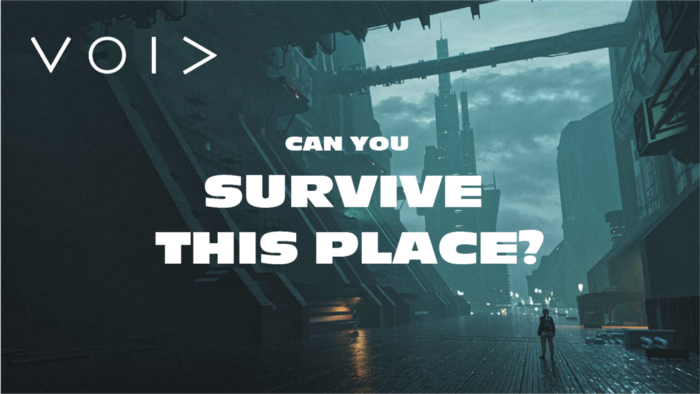 On a half-dead world, gripped in an age of ice and dominated by killer robots, humans scramble for survival. Exploring an MMORPG open world and enraging in combat across epic battlefields, players control and develop a character as they seek to find a place in this dangerous land. Will you scrounge through ruins for resources, or cobble together unique items from scraps.? Or perhaps fight for wealth and glory in the arenas? Or maybe you will look down from your owner’s box as gladiators die and bleed upon the sands for your personal gain! Whatever your choice, the world of VOID gives you a chance to pursue your goals and earn along the way!

In development on the Solana blockchain, Void is an MMORPG that runs on the Unity engine. Players will explore the broken world, craft equipment and weapons, and fight for loot in the PvP Arenas. From casual gamers to hardcore grinders to economy-focused merchants, with three worlds to explore, VOID offers plenty of opportunity for everyone to find their own role in the game.

Characters in VOID feature numerous levels of customization. Not only will characters equip gear through NFTs, but as they gain experience they have the opportunity to specialize in over 60 skill options!

VOID offers both PvE and PvP options. Players adventure, find gear and loot, and level up their characters. But here’s where it gets interesting. The choices you make during your character’s quests and adventures shape their personality and social status. These are not just somple cosmetics or title changes. Your moral and ethical choices have an effect on the rest of your game!

You can read more details in the VOID whitepaper.

Voidcoin ($VOID) is the official game currency. With it, players buy gear, character customizations, and other in-game items. Players primarily earn VOID by fighting in the arenas and exploring the world to find quests and loot. But VOID also boasts a collaborative crafting system. Industrious players can gather or barter for the materials they need to create custom items, and then sell those items on the markets.

VOID features its own in-game marketplace powered by a decentralized exchange called Serum. All game assets are NFTs. Armor, weapons, loot boxes, even Arena ownerships! Did I mention Arena Ownership? Void offers the option for land ownership. Players can build, customize, and rent out their Arenas, earning passive income through fees and other charges (concessions, perhaps?).

Earn by fighting in arenas, going on mystic quests, collecting items, building, crafting, hosting fights in arenas you own. There are many earning avenues for different playstyle. VOID will also offer a staking system, allowing long-term token holders to earn passive income by maintaining ownership of their tokens.

To introduce their token into the blockchain ecosystem, VOID plans an Initial Dex Offering (IDO) in December of 2021 from the 12th to the 15th. Each day, a different token launchpad will launch the IDO.

IDOs are a little different from an Initial Coin Offering (ICO). During an ICO, everyone buys the tokens directly from the offerer’s site for a fixed price. During an IDO, the tokens are initially put into a liquidity pool on a decentralized exchange and interested parties buy from the pool. And though the initial token prices will be fixed, on December 16th, once the initial offerings are complete, the pools will be fully opened and the price could fluctuate wildly!

The initial liquidity pools (LP) for this IDO will be in VOID-SOL pairs with a VOID price of $0.095 USD. Make sure that you check the site(s) you plan on using. Some may require joining a whitelist first. For further details about the plans for VOID distribution, check out the infographic below.

What else should I Know about VOID?

With all that economic stuff aside, the VOID team has explicitly said that are first and foremost a game. They want VOID to be a AAA quality game that is fun and engaging for its players. But the play-to-earn aspects and tokenomics will be in place and working for those who want to engage on a deeper level. And though players gain better equipment and increase the perks of their character, VOID promises a combat system where skill matters more than gear.

One fascinating aspect that I didn’t mention yet is the planned integration of features such as spectating and casting (announcers for eSports games)! We don’t have many details on how exactly this will work, but integrating Arena matches as an eSport into a wider MMORPG world could really be a gamechanger!

Though the expected release date for the final game isn’t until 2023, the teams plans for their NFT marketplace to go live before the end of 2021. There will also be a web-based mini-game in 2022 to serve as an on-ramp to their ecosystem and an introduction to the world of VOID. This will definitely be a game to keep an eye on over the next year!