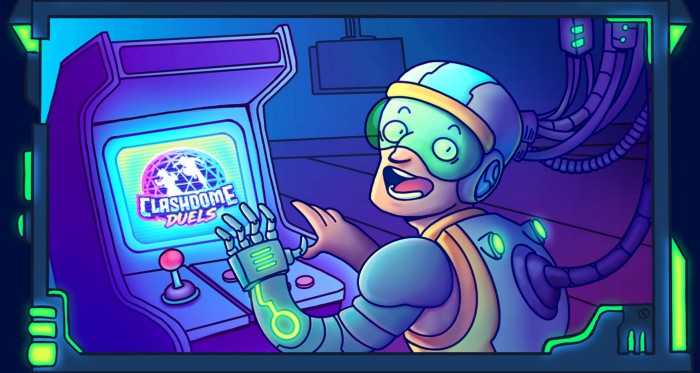 After recently completing a sale of their gen 0 citizens, Clashdome revealed some of the mechanics around how players will be able to play to earn (P2E) with their Citizen avatar. Players can either purchase an already created Citizen from the secondary markets, or they can pick up an unused Amnio-Tank and create their very own unique avatar.

Since they initially announced the launch of ClashDome Citizens, the team has consistently said that Citizens would be beneficial to their owners. And now, we receive some more details about what exactly that might mean.

Players with ClashDome Citizens can stake them and receive access to a special ‘Citizen’s Cubicle’. From there you can play games for free and earn Ludio when you win! The apartment also allows the installation of mining tools in order to generate resources, and a crafting station for creating tools! Mining tools come in two varieties, Vending Machines, which make Carbz, and Treadmills which generate Jigowattz.

Collecting resources from these NFTs every once in a while allows your Citizen to maintain a 24/7 passive income. Installed items do wear down after a while and need to be recharged by spending some in-game resources. Players expand their apartment with Area Slot NFTs, though it’s unclear where these come from. Also, though nothing official has been said on this subject, it seems that ClashDome Mining Tools might only be created by players? If so, this is a nice way to kickstart a player economy!

Taking gameification of basic features to the next level, there is even an opportunity to gamble during token swaps! If a player wants to cash our their accumulated Jigowatts or Carbz, they can swap them at anytime for free into tradeable tokens. But, if they are willing to gamble, there is also a special ‘GigaSwap ATM’. At this ATM, players are paired against other players who are also using the GigaSwap. After facing off in a fierce duel of rock-paper-scissors, the winner walks away with double the amount of tokens they were trying to withdraw, and the loser with nothing!

Though it’s a fun, interesting idea on paper, we’ll have to see how it actually plays out. I fear that players will find ways to game the system too much and/or grief other players. Hopefully the ClashDome team will keep an eye out for such shenanigans and make whatever changes might be needed to fix any situations that arise.

ClashDome is growing set of games running on the WAX blockchain. Players can compete against each other in head-to-head duels and by jostling for a top spot in the daily leaderboards. Winners are rewarded with Ludio, the native ClashDome token which can be traded on the Alcor exchange.

ClashDome just recently released their Citizens, Avatars who will provide ongoing bonuses and perks to players. Near term expansion plans include game triggers that hand out special rewards during matches, exclusive tournaments, and the opportunity to join in a Breeding Duel to grow next generation Citizens!